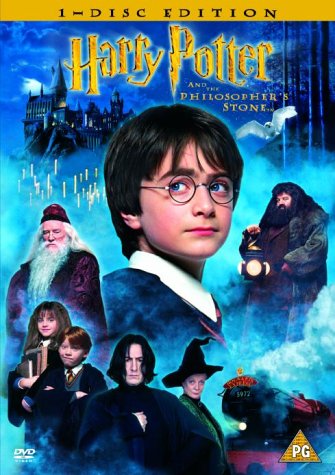 As the first Harry Potter film of the celebrated series, this is a must for ardent fans and newcomers to the global fantasy phenomenon. An adaptation of J. K. Rowling’s enchanting, funny debut novel, Harry Potter and the Philosopher’s Stone (known as the Sorcerer’s Stone in the US), it’s our first big-screen encounter with the series’ well-loved characters and the goings-on at Hogwarts School of Witchcraft and Wizardry.

We meet orphan Harry Potter (played by a young Daniel Radcliffe) while he’s as yet unaware of his magical powers and is living a miserable existence with his horrible Uncle Vernon and Aunt Petunia. A mysterious letter arrives, delivered by the friendly giant Hagrid (Robbie Coltrane in fine acting form), inviting Harry to study at the exclusive Hogwarts School and he soon discovers his true heritage as the son of a wizard and a witch. He’s also gained widespread notoriety, being the only survivor of an attack by the evil wizard Voldemort that killed both his parents. The film explores Harry’s growing realisation that there are two worlds: the non-magical world of humans, called “Muggles”, in which he used to reside and the magical fantasy world of wizardry that is his destiny.

The greatest strength of the film comes from its faithfulness to the novel, and this new cinematic world is filled with all the details of Rowling’s imagination, thanks to exuberant sets, elaborate costumes, clever makeup and visual effects, and a crème de la crème cast, including Maggie Smith, Richard Harris, Alan Rickman and more. Especially fine is the interplay between Harry and his new schoolmates Ron (Rupert Grint) and Hermione (Emma Watson) as they club together to fight the forces of evil. –Sally Giles