It seems you can not be the most popular game on earth and do not have your own version of Harry Potter. Harry Potter is one of the best-selling books of all time, for Dumbledore’s sake, and so Lego just had to do it: come out with the Lego Harry Potter Hogwarts Castle.

Be your best self and get ready to embark on a magical adventure inside the Lego Hogwarts Castle! The Lego set comes with Potter, Ron Weasley, Hermione Granger, Draco Malfoy, Professor Dumbledore, Professor Trelawney and two (2) dementors, so you can bravely explore the very insides of Castle just as good as if you were there yourself. 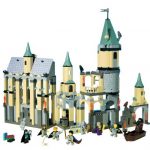 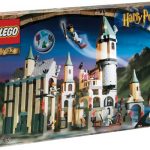 Watch out for the sinister dementors though, because they’re bound to ruin the fun and suck the life energy out of you. You do not want that.

Or if you want, you can add in more characters to the milieu such as Lord Voldemort himself, Professor Snape, Professor McGonagall, Professor Flitwick, Mrs. Norris, Argus Filch and more Dementors for more exciting chases requiring the difficult Patronus Charm to successfully fend them off.

Surprisingly enough, this Lego Castle is made in all the likeness, as much as possible, of the Hogwarts Castle we have come to love both in the book as well as in the film. The Lego version has even got the clock tower with the swing pendulum, the Gryffindor Tower, as well as secret rooms even Harry has never ventured in before.

It is so incredibly detailed that both hard-core and non-fans can appreciate it. You’ll get to see Dumbledore’s office with its sliding spiral staircase. You can even visit the Slytherin and Gryffindor common rooms, and listen to Professor Trelawney’s fascinating divination lectures in her eclectic classroom.

Lego Harry Potter Hogwarts Castle is more popular and more in-demand than ever. Satisfy your kid’s quest for wizardry and curiosity in magic with this handsomely-detailed, faithfully-rendered Castle.